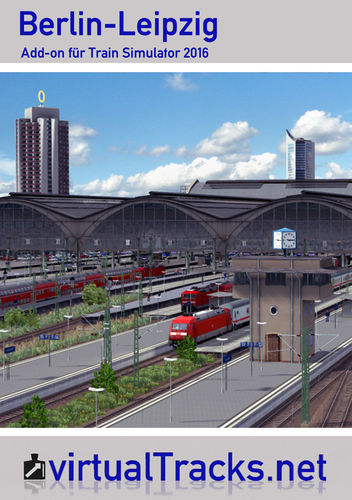 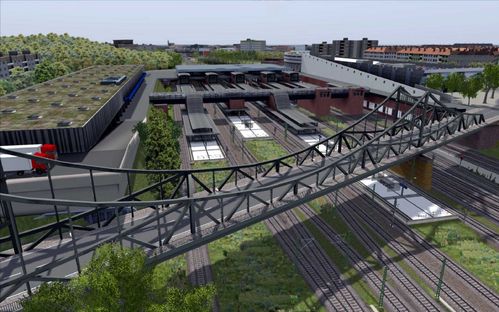 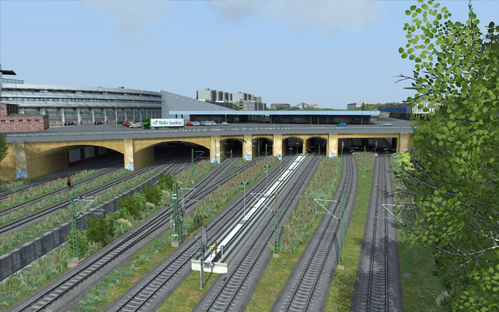 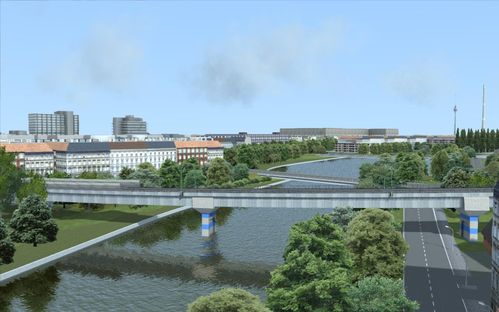 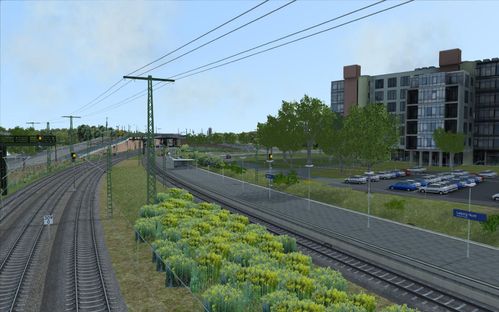 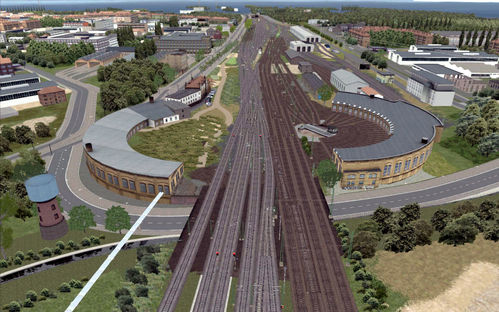 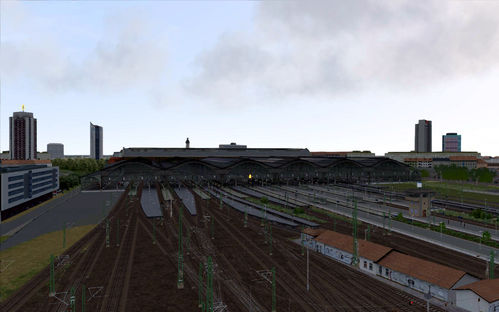 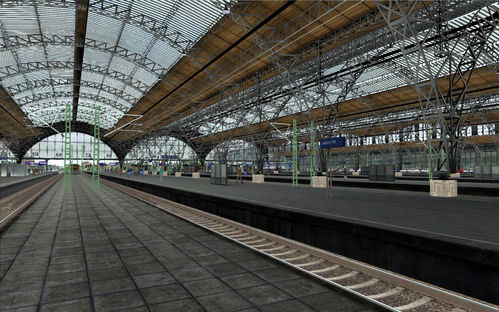 If you drive through the German railway land today, one discovers to the left and right of the tracks much that points to the past. There are stretches where there are many, and some where this is not usually the case. And with each passing year the traces of the past are increasingly erased. Who cares about what's out there when we rush by at 200 km/h, dashing quickly from one city to the other. I want to invite you to take a closer look along the Berlin-Leipzig route.

The traces of the past have been deliberately kept alive in our add-on. though in the real world things gradually disappear. In the real world, you can't fix everything in one day with such an add-on. Things disappear in a very short time; what was there yesterday, is gone today. We think of the interlocking whole: you once had an image of a track, the mind and soul of rail operations, before electronics made them empty relics.

In Berlin-Leipzig, we find them still to the left and right of the tracks. Thus, the add-on applies between 2006 and 2015. Today things are already gone, which still existed of 2006. More on that point:

In Berlin, the track began at Anhalter Bahnhof at Askanischer Platz with its huge, majestic concourse. The Second World War and the ensuing political conditions made this broken building and the tracks useless. The destruction caused by World War II bombs were followed in 1959 by an explosion, resulting in the portal that still stands today as a sad reminder of past splendour. Today, our trains go west past the former Anhalter Bahnhof.

The big roundhouse of the hitchhiker station serves the Museum of Transport and Technology as a support and presentation space for its historical treasures. In addition to the shed is a steel water tower, which we can see if we leave the north-south tunnel and look left out the window.

The lawn of the Anhalter Bahnhof retreated up to the southern section on Priesterweg from which heralds a steely water tower. We pass it when we leave Berlin Südkreuz just before branching to Dresdner Bahn.

The Anhalter railway was interrupted most recently when the Wall was built in 1961, only the S-Bahn went to Lichterfelde Süd. Immediately south of there, the urban area of ​​Berlin comes to an end. Until Großbeeren there was little railway traffic in the former GDR.

In Großbeeren we reach and cross the outer ring of Berlin, a ring railway, which led and still leads around the city of Berlin. The interlocking "Ghd" central switching point for the Genshagener Heide station and railway facilities to Ludwigsfelde, is today as an empty building that testifies to its the former importance. Travel and primarily freight trains to Halle, Leipzig, Erfurt came here from Schönefeld ( in the add-on we can drive up branch this stretch at least as far as Selchow).

On the right we pass the automotive plant in Ludwigsfelde, extending from the Berlin outer ring until Birkengrund Station. Immediately afterwards, we take the A10 motorway, the "Berliner Ring" and reach Ludwigsfelde, whose old station built in 1880 is listed today as a historic building that recounts of the earlier days of the Anhalt line.

The same applies to the reception building in Trebbin. At the entrance to the Trebbin station you can see a modern looking interlocking "Tn" tower, which up to 2006 was directing traffic at the station until an electronic interlock took over. The signal box has been demolished.

The switch box that divided east of the Luckenwalder goods station faced the same fate, having once served the town and the region, but reduced today to a great wasteland. We remember it because we have left the "Ld" switch box standing.

South of Luckenwalde we pass through the former military area Zinna - here there used to be the Forst Zinna Station and the Kloster Zinna stop. At the Forst Zinna Station on 19January 1988, a serious railway accident occurred in which the D716 with 211 006 at the top with 120 km/h brakes ran into a tank that was left lying on the railroad tracks. There were 6 deaths, including two drivers in the cab of the 211, and 33 injured. At the barracks, we are reminded of this by a few ruins and watchtowers. At the point where the "sinking" watchtower stands, the train wreck occurred.

When we enter in Jüterbog, the remnants of the old railway operation can be seen on the left hand side - roundhouse, social building and water tower, which in the course of the German Unity Transport Project 8 - which belongs to the Anhalter Bahn - was not needed and disappeared. In Jüterbog we also see old interlocking systems: the "JB" and "B3" switch box towers, both no longer in operation.

The next old railway buildings don't come up until Wittenberg. The large reception building was demolished in 2015 to make way for the Falkenberg-Roßlau platform. To improve transfers, a new reception building will be added on the side of the bus station.

Rather inconspicuous is the branch of the Pratau line behind the Elbe bridge. It once led to Torgau and Pretzsch and was a branch to Eilenburg. It's a beautiful route, that runs first along the Elbaue and then through the Dübener Heide past Bad Schmiedeberg, Bad Duben, and took the author several years. Today the branch line to Pretzsch ekes out a rather sad existence, passenger traffic has been cancelled.

Also not visible, though recognizable along the course of the track: behind Pratau there was once a test track for the Deutsche Reichsbahn: since the route ran a straight distance of 23 km, it was suitable for high-speed testing. On 11In October 1972 the steam locomotive 18 201 reached 182.5 km/h and has since become the fastest operating steam locomotive in the world (now 02 201).

Apparently we meet the past again in Bergwitz: first the old block location, the newly renovated Post 107, which used to be switch box and barrier posts, and on the left hand side, the old briquette factory.

The reception building of the following stations, wich the exception of Burgkemnitz, carry on a sad existence, unused, vandalized, waiting to be reused or demolished. A nondescript old house right of the route in Gräfenhainichen was once a switch box for the station.

The station building in Burgkemnitz was renovated in 2009 and now houses ticketing, a bistro and commercial offices.

In Muldenstein we see three large chimneys to the left of the old railway line. They once belonged to the first German power plant, which produced electricity exclusively for electric traction train. The chimneys fell in 2010, but stand as a proud monument at least in the add-on.

In the past, when one reached Bitterfeld, the eye fell to the west upon the huge chemical combine on the railway line. Here above all chlorine chemistry was operated. A large train yard was set against the chemical plant. Typically, you first felt Bitterfeld coming in your nostrils. When the air was very damp, green demolition sparks of electric locomotives fell to the ground. The copper of the contact lines reacted with chlorine in the air to form copper chloride, which was responsible for these green sparks.

Today the train yard is a solar power plant, the chemical plant was turned into a huge business park. The air is clear again, that sparks bluish ...

Behind Bitterfeld we leave the Anhalter Bahn, which further leads to Halle/Saale and continues on the route Dessau-Leipzig. In Delitzsch the station building of the upper station falls behind the lower station located southwest along the route Cottbus-Halle/Saale. This beautiful old building is now put to cultural use and so remains - restored and listed as a historic building.

As we come to Leipzig we are first welcomed by the old Neuwiederitzsch signal box. In the Leipzig-Mockau station, the B1 and W2 switch boxes still work. At the entrance to the Leipzig Central Station, we are greeted behind the Berlin bridge by the disused switch box command "B10", followed by marshalling "R9" and the disused Leipzig West depot. Directly behind the Leipzig West depot was the big signal box tower "B3", which dominated the station. This fell victim to the construction of the Leipzig City Tunnel, it was simply in the way of new routes.

Equally striking and well-known is the dispatch building on track 12/13. It was demolished in 2014 because it in the way of the ICE-railway platform extension as part of the German Unity Transport Project 8. At that time, I began a discussion in the Forum rail-sim.de about whether the building should be preserved. If it bothers you, you can get rid of it using the track editor.

Now we have reached Leipzig central station. A historic train station dating back to 1905, once Europe's largest railway terminus, divided into Prussian and Saxon railway stations, and affected by deconstructions since 1995 but still exceeding the Frankfurt, Munich, Zurich and East Paris stations (in terms of number of tracks).

* Prices including VAT plus shipping
Browse these categories as well: virtualTracks add-ons, Welcome to virtualTracks.net